It is not the facts in the clinician’s head which determines competence: it is how those facts are used, interpreted, analysed and creatively synthesized in order to arrive at a formulation of the clinical problems and to plan a response.

Fundamental to our teaching and assessment in the Department therefore is an explicit recognition that clinical education goes beyond the memorisation and recall of facts (or mere recognition of physical signs). As educators and assessors, we need at all times to strive to stimulate these higher order cognitive processes. Bloom’s taxonomy is a useful way in which to conceptualise these processes.

A group of educational psychologists led by Benjamin Bloom worked for eight years on a project to classify the thinking behaviours which underlie learning. They classified these under three major headings: the cognitive (knowledge), affective (attitudinal) and psychomotor (skills-based) domains. This work was completed in 1956.

All three domains are clearly important in our outcomes and deserve assessment. However, for the purposes of this essay, it is assessment of the cognitive domain, which is sub-classified into six levels, which is most pertinent.

The diagram below illustrates the hierarchy of cognitive behaviours according to Bloom and as revised by Anderson et al. (Adapted from Schultz L) 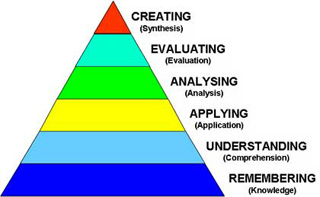 In tutorials, and above all in assessments – whether clinical or written – we need to move off the Remembering or Knowledge base and explicitly encourage and test the higher order skills.

Not all authorities agree that the hierarchy is strictly linear as suggested as above. The modified version below, for instance, suggests that the top three levels are more or less of equal rank. 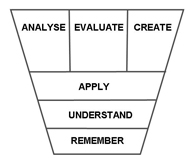 This is of major importance in designing exams. True-false MCQ questions and conventional OSCE stations are notorious for their dumbing-down effect on assessment. Either one knows it or one doesn’t; either one can remember how to do it or one can’t. Properly designed assessments, including well-structured multiple choice questions (not one right and four wrong, but five plausible answers of which one is somewhat more appropriate than the others), and clinical exams which draw out thinking and analysis, and not just mechanical actions, explicitly address as many of these levels as possible.

Clearly effective medical practice is entirely based on the use of all 6 levels of the pyramid. Yes, the doctor needs:

But beyond that, he or she has to:

The following material is adapted from Fisher D.

One can construct a further hierarchy of 4 levels of knowledge as follows:

Indeed, it is possible to construct a two-dimensional grid in which Bloom’s 6 levels are linked to the hierarchy of 4 knowledge levels:

Proceed to Deep and surface learning

Don’t miss a beat, be sure to follow our tweets.

Are you a Youtube junkie? Get your fix on UKZN’s channel.

© University of KwaZulu-Natal: All Rights Reserved